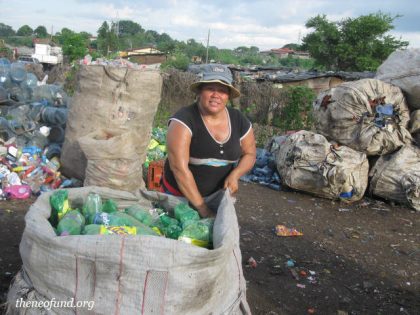 Aurora was born in the city dump called La Chureca and grew up there with thirteen brothers and sisters. They drank water from the polluted lake. They dug through the trash searching for plastic recyclables. They didn’t go to school. Aurora couldn’t read or write. One day her father found some books in the garbage and by studying them Aurora taught herself to read.

When Aurora became a young adult she wanted to grow her family recycling business but she had no money to work with. That’s when she learned about the micro-loans The NEO Fund was offering to beginning micro businesses. Aurora’s first loan, in 2009, was for $100. She said it was so valuable to her it was like getting $5000. “My grandmother always said, ‘Plastic is money,’” she said, “so I invested the loan into plastics and God multiplied the amount.”

Over the next three years Aurora would take 6 more loans from NEO, increasing the amount each time. She hired workers, bought a pickup truck and moved out of the dump to a house in the Guadalupe neighborhood.

“The first thing I do in the morning,” she says, “is pray thanks to God because my family doesn’t have to experience the things that I did in the dump. They have all of the things I never had.” Aurora’s next goal is to buy a large utility truck to significantly expand the business. She is saving money for the truck now.