The kind, sensitive, soft spoken young man that we knew as a youth in our congregation still possesses those virtues. In addition, Zach’s gentleness and creatively are now accompanied by a self-assurance and confidence that come with personal success founded in education, innate talent, and support of family and friends. Rev. Rick in his usual humble manner shared at a small group meeting that Zach was scheduled for the premier performance of his Concerto for Violin at Carnegie Hall on July 26. Carolyn and I decided on the way home from the meeting that we definitely had to attend. We deliberately made it clear we wouldn’t intrude on the Davis family during this special occasion. As our cab let us off at the hall we were immediately greeted by Rev. Rick with his usual warm hug. We entered the Hall and spotted Gordana. She looked beautiful. She was radiant in anticipation of seeing her son experience one of the most significant events in his life. She graciously welcomed us and made us feel we made the right decision to attend the concert. A “concerto” (concert in Italian) is a composition that features a particular instrument. It traditionally has three movements with the soloist’s artistic talent showcased most in the first and third movements. It is formatted to have a variety of musical exchanges between the soloist and orchestra that makes a concerto particular entertaining for the audience. Zach’s concerto was special in that he incorporated in his composition music for nine different instruments in an orchestra of 19 musicians, the violin soloist, and a chorus of eight voices interacting throughout the five movements. The audience was caught up in the dramatic build-up to the final crescendo. The young conductor ended the final movement with a dramatic flourish that left the audience spellbound. There were a few seconds of silence which added to the drama of the moment before the well-deserved standing ovation. The conductor gestured to Zach who was sitting in the audience with his parents to join them onstage. The soloist, conductor and Zach took several well- deserved bows along with the orchestra and choir. This was an experience Carolyn and I will long remember. It gave us a glimpse of that undefinable, almost mystical creative process that brings joy to our world. I was told that the conductor and Zach are collaborating on an opera that will be ready for performance in the next year or two.

Congratulations Zach Gulaboff Davis. You are the one we’ll say with pride, “We knew you when……” 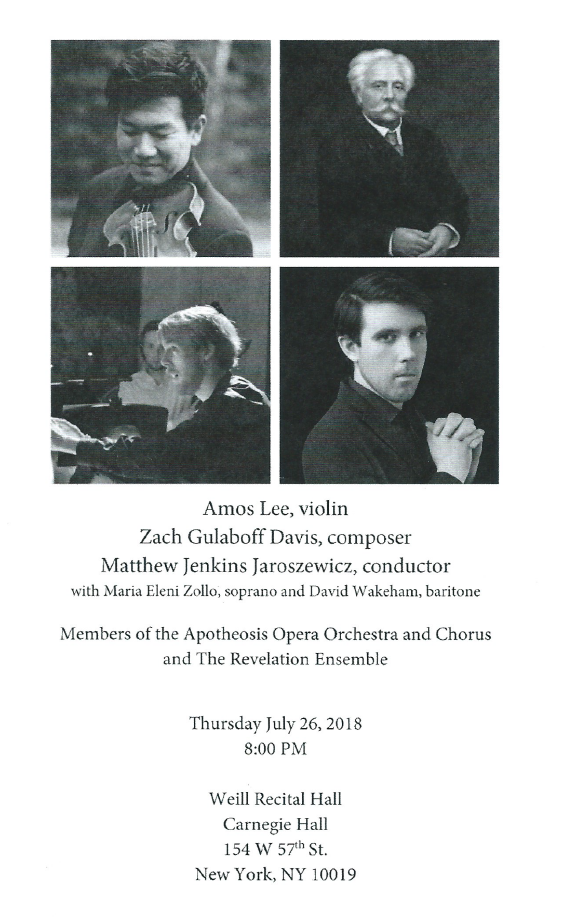