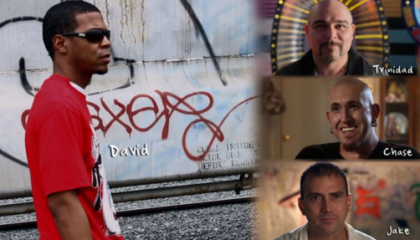 On Saturday, May 20, at 8:15 p.m., the Social Justice Action Team is sponsoring the showing of “Inside Peace” a remarkable documentary telling the story of four people inside a Texas prison.

The film has won several Best Documentary awards, and offers an empowering story of rehabilitation in prison.

The film focuses on four inmates attending peace classes, and follows their struggles to rediscover their humanity following addiction and violence. By finding their inner strength, wisdom and inner love they are able to rebuild their lives after they leave prison.

The film affirms the first principle of Unitarian Universalism – “The inherent worth and dignity of every person.”

The Social Justice Action Team would love volunteers to help out with the film showing! Volunteers can sign up at a sign-up sheet at our Social Justice table Sundays in Fellowship Hall on Sundays.

You can also e-mail Sarah Rohrs at srohrs@gmail.com.

More About the Film

Criminal offenders with lives marked by generations of violence, addiction, and poor social conditions attend the Peace Class in a Texas prison where they struggle to discover their humanity, improve their outlook on life and rebuild their lives from the inside out.

Four years in the making, Inside Peace is a feature documentary that focuses on several compelling characters who were incarcerated at Dominguez State Jail in San Antonio, Texas. There, they embarked on a journey of change by enrolling in the Peace Class, one of the few self-improvement programs offered in prisons across the country that are not faith-based, but instead concentrates on the individual’s inner strength and self-worth. Trinidad, David, Chase, and Jake grew up in neighborhoods with the same multi-layered deprivation that produces most of the offenders in the United States: Lack of education, poverty, joblessness, unstable family lives and exposure to the criminal element.

All had come to identify with the hardened exteriors they developed as coping mechanisms and presented to the world — a brutal street fighter, Trinidad was feared inside and out of jail — David was a small-time drug dealer, who fended for himself on the streets as a teenager trying to get by — there never seemed to be a right time or a right place for Chase his whole life — born into a family of heroin addicts, Jake abused drugs from an early age. None of them was ever taught or realized he had the capacity to make positive choices in life.

While the news sensationalizes violence and tragedy, and television networks pump out “behind-bars reality” shows,Inside Peace provides a window into the hearts and minds of men doing hard time who choose to break the cycle of negativity. With a supporting cast of fellow inmates, prison officials, experts and family members, the film takes the viewer down these men’s difficult roads as they reintegrate with life on the outside relying on the personal peace, self-worth and dignity discovered at the Peace Class. If they can change the only belief system they’ve ever known and are successful in understanding their value as human beings, they just may have a chance of living better lives by making better choices.

The path becomes most treacherous when released from jail and as they try to negotiate a world filled with conflict, rejection and hostility. Faced with these familiar roadblocks at every turn, they must avoid the temptation to return to their old ways—those that led to failure and imprisonment in the first place.