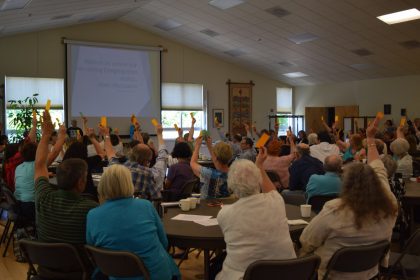 UUCS held its annual congregational meeting on Sunday, May 20, 2018 after a single service at 10:30.

These Board  and Nominating Committee candidates were approved by congregational  vote:

Proposed Budget:  The Budget Committed is proposing a 5% increase in the total operating budget to $329,286 from this year’s total of $313,695.  A summary comparing allocations between this year and next year and an explanation of projected income and expenditures is available on the 2018-19 Budget webpage.

The Budget was approved with an amendment:

“The motion is to adopt the budget as presented and direct the Committee on Human Resources, the Finance Committee and the UUCS Board to work together to address staff salary inequities with the funds available by September 1, 2018.”