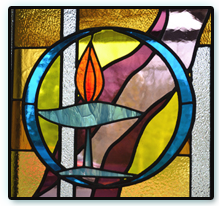 Among the UUCS groups resuming regular meetings in September is the Women’s Alliance, as UU groups affiliated with the Unitarian Universalist Women’s Federation have been known for generations. All women (and interested men) are welcome to attend meetings, so consider yourselves invited to the meeting on Tuesday, September 11, at 7:00 pm in the Hanneman Fellowship Hall. UUCS member Sara Pickett will describe a proposal that grew out of the Worship Team’s discussions about possible changes in our services‒and in our sanctuary.

These discussions covered the use of our sanctuary’s space from both a functional standpoint and an inspirational one and led to the formation of a small task force which has had input from everyone involved in Sunday services as well as from the questionnaires congregants filled out this summer. The Worship Team endorsed the resulting proposal and, since some parts of it will require both volunteer carpenters and considerable money, has a couple of fundraising ideas.

Alliance meetings usually begin with a speaker, followed by refreshments and a business meeting. It’s perfectly acceptable to leave before the business part, but visitors often like to stay and learn more about us and about projects they might participate in. September is not too early to hear about the December Holiday Bazaar! Regular meetings will follow on the second Tuesdays of October, November, February, March, and April. In addition to running the Holiday Bazaar in early December, Women’s Alliance usually decorates the sanctuary before Christmas and ends its year with a dinner meeting in early May.