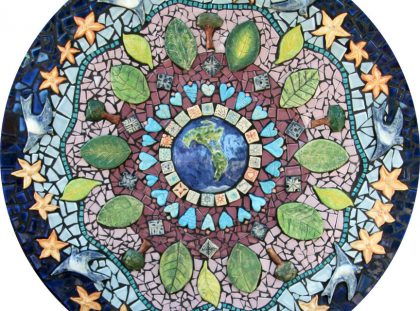 What Salem landmark was created by 600 community volunteers and involved 26,000 pieces? You guessed it: the Salem Peace Mosaic, which front the YMCA building on Court Street. This remarkable project, originally created under the direction of artist Lynn Takata in 2011, is in danger! When the YMCA demolishes the current structure to replace it with a more modern one, Salem will lose its much-loved peace mosaic unless the community pulls together to save it.

e fundraising effort to save the mosaic will be a benefit concert to raise funds to preserve the Salem Peace Mosaic will be held at UUCS on November 10, beginning at 7 pm. The concert will feature Rich McCloud, Jan Michael Looking Wolf with Robin Gentlewolf (Native American flute music) and Peter Bergel with Elizabeth Gingrich and Mark Babson (folk music sing-along).

Suggested donation is $10/person. You can purchase advance tickets to ensure that you get a seat. If you can’t make the show, but want to support the project, you can make a donation of any size.

The Mayor wants to save it, the President of the Oregon Senate wants to save it, a majority of the City Council is in support, the leaders of the Carousel in Riverfront Park want to mount it on their new building, so the will is there. What’s missing is the money.