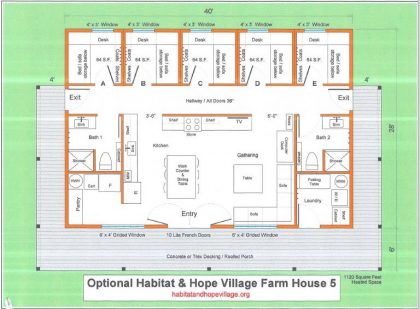 The Social Tragedy Driving our Efforts

In 2019, the Oregon annual statewide field census of the homeless population counted 15,876 persons. In Marion and Polk Counties, the June 2020 census counted 1,188 homeless of which 69%, 815, were individuals and 31%, 373, were in families. Overall, there is a higher proportion of chronically homeless in the two counties, 49%, than in the statewide homeless population. The ARCHES program of the Mid-Willamette Community Action Agency, with which Habitat & Hope Village is coordinating its efforts, estimates that at any given time there are approximately 40 single individual women who are homeless in Marion County.

Your Thoughts and Decision are Needed

Habitat & Hope Village (HHV) is now at a crossroads with the Farmhouse Project. The UUCS Board of Directors are in agreement with the HHV plan to help single women transition out of homelessness but are split on developing a land lease for the project to proceed on the north lot property. Some feel the project will be a liability for the church when the program ends and have concerns about transportation issues. Others see a homeless problem in need of support with UUCS becoming a leader in the community. HHV believes the project aligns with the UU values and principals and could be a future revenue source as a rental home. The UUCS Congregation will make the final decision about moving the project forward. What are your thoughts and ideas?  Email them to habitatandhopevillage@gmail.com

Check out our website for additional information: habitatandhopevillage.org.
Submitted by Paul Wilson