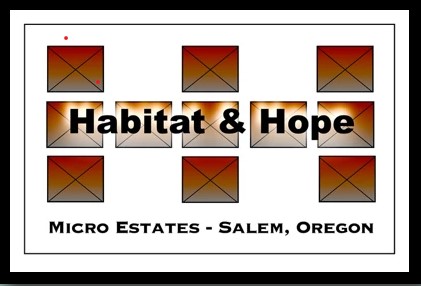 HHV is currently investigating ways to supply mobile shower and laundry facilities to serve people in existing and planned “micro-shelter communities” within the Salem Urban Growth Boundary. These communities, managed by Church at the Park, are designed to provide safe, secure, temporary shelters in small, managed clusters, for folks who would otherwise be un-housed.

According to it’s 2021 annual report:
“Church at the Park (C@P), serves our unsheltered neighbors in the Salem area. It began in 2007 as a meal shared in the park, open to any who wished to join the table. Today, we seek to interact in a deeply relational way – inviting people who begin as guests, to become volunteers, and eventually our staff…
C@P has three functioning priorities: Collaborative Navigation, Emergency Sheltering, and
Workforce Development.”

Between April 18 and November 30, C@P provided temporary shelter for 191 people in two “micro-shelter communities” in northeast Salem. One, on property owned by Catholic Community Services (CCS), contains 30 shelters for women and families. Eighty-seven people were served at that location. Thirteen (72% of those who left the program) moved to “more stable housing.” The other micro-shelter community is on state property near the corner of Portland and Silverton roads and contains 20 shelters for adults. There,104 people were served. Eighteen (37% of those who left) found more stable housing. C@P continues to serve about 300 unsheltered people per month at its original Turner Rd site.

While the CCS location has a shower tent on-site, the other two locations share a portable shower that visits once per week. The ability to move facilities between sites spreads the benefit to more people. But, having to move hygiene-related facilities frequently makes it difficult to serve folks who need more than an occasional shower and change of clothes. The issue of personal cleanliness is vital to their health and well-being. It must be addressed so that they can move into more stable housing and possibly employment.

A recent city-wide funding campaign raised $600,000 to purchase 125 micro shelters.
As more micro-shelters — at more locations — come online, the need for shower and laundry facilities will increase. Since all of the micro-shelters are designed to be portable, and shelter communities are designed to be temporary, the next city-wide funding campaign may be one to provide a set of portable and laundry and shower facilities for each micro-shelter community.

Contact habitatandhopevillage@gmail.com to learn how you can get involved.