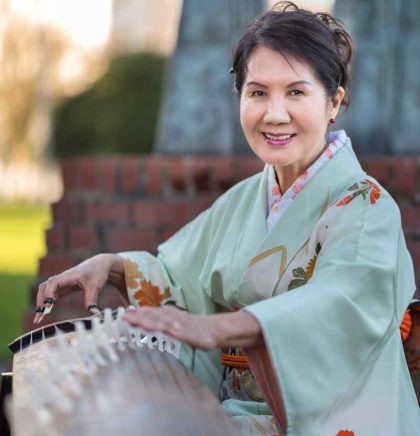 Masumi Timson will perform on the traditional Japanese instrument, the koto at 7:00 pm on Friday, April 15 at the Unitarian Universalist Congregation of Salem.  She plays both classical and contemporary Japanese koto music, and also sings Japanese classical songs with koto accompaniment. She enjoys collaborating with a variety of western musical instruments to explore a wide range of musical genres. In this concert, she will be joined by Dr. Kit Abrahamson on the cello for several selections in an Asian fusion “East meets West”.

Purchase tickets online here, or at the door. Masks and proof of vaccination required to attend.

Masumi Timson holds a Master’s Degree in Koto from the Seiha Conservatory of Japanese Music in Tokyo. Masumi has participated in the recording of several Pink Martini albums and has performed with the band around the world, including Carnegie Hall, the Hollywood Bowl, the Grand Rex in Paris, and the Blue Note Tokyo. She has also performed solo and with various other musical groups and artists both in Japan and the USA.

She has released her own albums, Picture Dreams with a violinist Fumino Ando, and Pacific Bridge, Confluence, with Richard Crandell on the Mbira, an African traditional instrument.

Here in Salem, Masumi is the instructor of the Koto Club at Willamette University and her own studio.

We have been celebrating the cultural diversity of the Salem area through a nine-concert series (now Live!) from fall 2021 through spring 2022. The UUCS Music department planned the concert series for Tuesdays or Fridays each month from October 12, 2021 to June 14, 2022. Series planner, Dr. Kit Abrahamson states, “We want to support the musical community in and around Salem. This varied lineup will help celebrate our community’s cultural diversity in music.”

The Live concerts are held at 7:00 pm to 8:30 pm on Tuesdays or Fridays. Live tickets are $20/$15 seniors and students. There is a discount for a season pass. Online streaming tickets for individual concerts are $5 each, and discounted tickets for streaming the whole series will also be available.