Home » Services » Water Communion » Are You a Hamal? 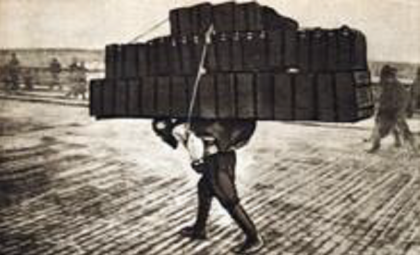 Centering Thought: “We have all known the long loneliness and we have learned that the only solution is love and that love comes with community.”
― Dorothy Day

No RE classes.
Please join us for our annual Water Communion Sunday. Bring a small vial of water that symbolizes something meaningful for you.
This is the last week for summer schedule.

Water Communion Homily 2016: “Are You a Hamal?” Are you a hamal? You just might be and not know it, and if you are, you might consider whether you want to make that your permanent full time job – it’s a tough one. Right now, many of you are wondering: “What the heck is a hamal?” Hamal sort of sounds like “camel” and that’s kind of fitting, since they both often carry heavy burdens. The word comes from the Arabic verb “hamala” which means “to carry” and that’s what they do – carry heavy things. Hamal is the name given to an ancient class of porters in middle eastern countries who have been carrying heavy burdens for thousands of years to earn a meager living. They hoist incredible burdens on their back – the heavier the burden the more they get paid, so they pile on as much as they possibly can to eke out a meager living. You won’t believe how much some hamals have to carry on their backs.

Really, no one should have to bear such a burden – the human body isn’t made for such heavy loads. Oftentimes these poor men become permanently stooped over because the heavy burdens they must carry every day. They become so disfigured that they can no longer stand erect.

Now back to my original question: Are you a hamal? I don’t mean are you an actual hamal – what I mean is this (MIME ENACTS BEING LIKE A HAMAL AS I SPEAK) : Do you carry many heavy burdens that weigh down your spirit – too many worries, responsibilities, fears, regrets – things that weigh you down and make you stooped over? You may become like a hamal without actually meaning to take on such a hard job. It just kind of happens, a little at a time as the burdens of care and concern pile up, day by day. It may happen so slowly that you’re not even aware that this is what you’ve become – a hamal who carries so much of a burden that you get so stooped over that you can’t experience the wonder and joy and love in life anymore. Is that any way to live?

Why should you be expected to carry so much of a burden, day after day? That’s not right. Why not just throw down your burden?  That can be tempting – to just throw it all down, play hooky, run away, escape. But is that right? If a person doesn’t do what they can for the common good then someone else will have to pick up the slack and that will turn that other person into a hamal if they have to carry someone else’s load. That’s not right either. You and I are called to bear our fair load of responsibility in this life.

So what responsibilities do you have – to yourself, your loved ones, your congregation, your surrounding community and beyond? It’s different for everyone but everyone has SOME legitimate load to carry in life.

You know who really knows how to carry a load? Lots of women in the world who are able to carry jars and baskets on their heads – and here’s an amazing fact:  African women can carry up to 20% of their body weight on their heads without using up ANY extra energy, whereas a man carrying the same load on his back uses up 13% more energy. I think they provide a pretty good example of how to carry a load with spiritual poise and grace.

Don’t lean too far back and dwell on the past/ Don’t lean too far forward and try to rush into the future. Just be in the moment, stay upright and balanced in the present, taking one graceful step at a time, moving forward with dignity and purpose. If you focus on each responsibility as it appears, moment by moment – maybe stop trying to multi-task – you need not feel overwhelmed and overburdened like a poor hamal and you can do what you need to do.

Many of these women carry water – the lifeblood that flows through life and sustains us all. No one can live without water. Did you know that you, too, carry a precious load in this life? What you bring to others makes a difference. Then, too, each one of us is called to carry the water of love and compassion to thirsty souls in this world as well as bearing the other legitimate responsibilities that make our common life possible.

This morning as you bring the water symbolizing your individual life just know how vital is the offering you make to our common congregational life – it is a great gift that enriches our lives and makes community possible. For each such unique and meaningful offering we are profoundly grateful.