Home » Services » The Call of Conscience and Courage

Are we called to offer sanctuary to some who live under threat of deportation? If so, how will we do this and what does it mean?
Centering Thought: The human voice can never reach the distance that is covered by the still small voice on conscience. – Mahatma Ghandi 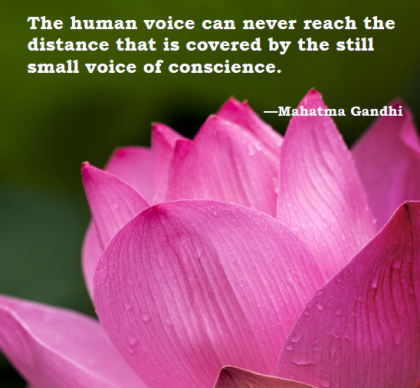 Conditions were harsh in your country of origin. You could not find work to support your family and you could not bear to see your children go hungry. You wanted to find a way out of poverty. Or you you faced great danger – sometimes from your own government, but more likely, from violent, vicious drug cartels that have claimed the lives of your relatives, neighbors, friends – all a consequence of the “War in Drugs” launched by the U. S. government many years ago. You wanted to live in a place where you could survive, work and earn enough to support your family and maybe even save some money.

So, like so many others before you who came to the United States as immigrants, you came here for a better life. Some said you should have come here legally, but you knew that was not possible – there was at best a twenty year waiting period even to be considered and really, virtually no chance for you to be granted legal status. Yet you also knew that the United States did need you, even if it wasn’t willing to legally admit you. Indeed, you knew that the U.S. economy depended upon the labor of immigrants like you. You knew there were hard, low paying jobs there that went begging that you were willing to do, and this worked well for everyone. It wasn’t easy for you – you had to pay thousands of dollars to smugglers (coyotes) to guide you in, even as you knew your life was at risk – (over 6,000 have died since 1998).

You worked so hard, yet you were able to earn enough to send some funds back to your family. You played a vital role in strengthening the U.S. economy and paid much more in taxes that you received back in any services. You and other undocumented immigrants put billions of dollars into a social security system that would never benefit you (ignorant, ill informed claims to the contrary). Things were going not well, but OK – not nearly as well as it should because you lacked legal status – but as long as you worked hard and didn’t break the law you felt it would be good.

You are no different that those who came here before you who came at a time when gaining legal status easier and whose descendants are now U.S. citizens. Yet the U.S. political system has been paralyzed by partisan wrangling and immigration reform is never passed and you are left in legal limbo.

You are also not different from immigrants who came before you – the Irish, the Eastern Europeans, the Jews, the Chinese, Japanese, Southeast Asians and many others – who have also faced fear, hatred, prejudice, discrimination except that your brown skin has made it even harder, but you have endured and persevered. Too often you were cheated out of your wages or payments you had made because unscrupulous employers here knew that you would not dare to go to the police to complain about being cheated out of your wages.

Yet here was better than where you came from – even if some called you an “illegal alien” and you knew that the authorities could deport you if you had the misfortune to fall into their clutches. Generally, it was only those who had committed bad crimes who were apprehended and deported. Living here under these conditions, hard as they were, was worth the risk. You had found a better life for yourself and your loved ones.

Then that man named Trump ran for president. During his campaign he said that those who came from your country were murderers and rapists. He told many lies – many lies! He demonized you for the base purpose of gaining political support among those who did not know your real story, who were inclined to believe the worst about you and now he gave them permission to do so. He stoked their false fears and prejudices and promised to be a strong man who would make them secure from the threat you did not pose. During his campaign he promised to deport millions of illegal immigrants and when he got elected many agents of Immigration Control and Enforcement felt that all restraints on their power had been removed and they began arresting and deporting those who would had formerly felt relatively safe.

Now fear permeates your life and the lives of your loved ones and friends. You live in perpetual dread of being apprehended, jailed, deported away from your family members here. You are now living in a police state – for you this president has turned the country into the “Disunited Police State of Amerika” because you know that at any time they can come for you and take you away – away from your family and the life you have created in this country.

It seems as though the U.S. has turned into a cold, cruel and heartless land. Or has it?

It’s precisely in times like this that faith communities like ours are called to be moral voices in the community – not only in word, but in deed.

For all the years that this building has stood we, one of the founding congregations of the Salem Interfaith Shelter Network, have faithfully provided sanctuary for homeless families unable to afford shelter.

And now, due to inhumane and ineffective immigration laws there are many hardworking undocumented people who need and deserve sanctuary.

We cannot provide sanctuary for all those who need it, but it lies within our power to provide sanctuary to an individual or a couple who are in danger of being separated from their families and being deported. And by so doing, we will not only provide sanctuary for that person, our action will serve as a witness, as a beacon of hope and compassion, and an act of protest against our government’s cruel and unjust practices. Even as the president continues to appeal to the baser fears of our fellow citizens, casting a paranoid, “us vs. them” spell upon many, we are called to be the spiritual antidote and lift up a truer vision wherein we see humankind as one, where we affirm that everyone has inherent worth and dignity, everyone has a right to exist – that there is no such thing as an “illegal alien.”

This is not just regular social service outreach – it will be, if we vote to do it, a bold act. This in our spiritual DNA as a prophetic religious minority – our ancestors were those who espoused theologically unpopular views and asserted their rights of freedom of conscience and expression and were sometimes persecuted for this. We benefit from the freedoms they won and now today history is asking us to win freedom for others – freedom from cruel, unjust and inhumane laws, freedom from fear of arbitrary arrest, freedom from bigotry and racism, freedom to work and live and enjoy the blessings of life just as many of us (not even ALL of us, for there are some in our congregation who are at risk).

I’ll be honest – there is some risk in this for us and the many other congregations around our land who take this stand because we will be breaking the law – a cruel, inhumane and ineffective law (yet, I’d also say it is a minor risk). But not providing sanctuary poses a greater collective risk for our nation because that will mean we have been cowed by the bullying tactics of our authoritarian president who seeks to diminish our freedoms. Furthermore, in providing sanctuary (as the First Unitarian Church in Denver, CO. has bravely done) we will be obeying a higher law – the law of compassion and justice and we have this unique opportunity to bear witness to this higher law in our land during this dark hour in our nation’s history. If we do choose – and it will be a choice made by congregational vote – most likely made at our congregational meeting on May 21, I envision that in future days we and those who after us, will look back in gratitude, pride and appreciation and note that “at that time, when bigotry and intolerance and ignorance posed a genuine threat to the national well being, our congregation did the brave thing, the right thing, the honorable thing in taking a principled stand against a cruel administration.

We are currently living under possibly the worst presidency our nation has ever endured. Historians are already saying that our morally rudderless 15th president, James Buchanan, who enabled slavery to spread and allowed the Confederacy to gather strength, will have to move over because a new worst president will now take his place. This president today promotes hatred and bigotry, he does not understand democracy, he does not stand for the truth or tell the truth, he does not understand the proper role of government. He is not morally or ethically fit to serve. He betrays the values of our religious movement and the high values of our nation. Shame on those who know this to be true yet enable him to continue serving, who ignore his lies, his abuses of power, who place partisan advantage above the national welfare. History will judge them harshly. By standing up to this administration we weaken it – we strike a blow for the humane and inclusive values upon which have been our nation’s highest ideals.

We are uniquely positioned to be the first congregation in our community to take this bold step – and many in our community, our UUA and progressive religious bodies will applaud and support us. We are not doing this alone. Time and again, it is the Unitarian Universalists who are in the front ranks defending those whose rights are denied. As a religious tradition founded by heretics who were not afraid to speak truth to power and stand for that truth we are now called to do so again.

Half a century ago Martin Luther King, Jr. sent out a call for clergy across America to join him in Selma, Alabama to protest racist oppression, and it was the Unitarian Universalists who responded in disproportionately high numbers to that call. Now we are being called by immigrants rights organizations to take a bold stand on behalf of those who are being oppressed. Will we answer that call? I hope and believe we will. Speaking not only as your minister but also as a voting member of this congregation I know how I will cast my vote when we meet on May 21 and choose whether or not to become Salem’s first sanctuary congregation.