This Sunday we’ll have our annual celebration of the Czech Unitarian Flower Communion – a recognition of the beauty and diversity of our congregation. Bring a flower for the bouquet! To further recognize transitions in the membership of our congregation, this service will include bridging our youth into young adulthood, child dedications, and a welcome to new members.

Centering Thought: Diversity is the magic. It is the first manifestation, the first beginning of the differentiation of a thing and of simple identity. The greater the diversity, the greater the perfection. – Thomas Berry 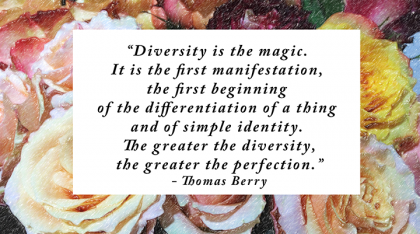 If you were a flower, what kind of flower would you be? I know that now, in June, we’re thinking about all kinds of flowers that come out when there’s plenty of sunshine, and warm days, and good company from all the OTHER flowers that have bloomed. June is a nice time for flowers.

Let’s remember some of the first flowers that bloom. The very first flowers I see each year are crocuses. Sometimes I wonder what it’s like to be a crocus – to be the first flower to come up and open your face to the sun, to be brave enough to push up through the ground when it’s still cold, and maybe there’s even a little snow!

This spring I saw a poem about that.

Adapted by Kim Crawford Harvie from the work of Jo Carr

It takes courage to be crocus minded.

When the hazards of winter are

Safely behind and I’m expected,

And everything’s ready for roses.

Knifing up through hard-frozen ground and snow,

Sticking their necks out

Because they believe in spring

And have something personal and emphatic

To say about it.

Even when I have studied the

Situation, and know there

Are wrongs that need righting,

And know that my speaking out may offend,

For it rocks the boat –

Well, I’d rather wait until June.

Maybe things will work themselves out,

And we won’t have to make an issue of it.

Wrongs won’t work themselves out.

Injustices and inequities and hurt

Somebody has to stick their neck out;

Cares enough to think through

And they have something personal

And emphatic to say about it.

Could it be that there are

Things that need to be said,

And I need to say them?

I pray for courage. Amen.

Ninety-four years ago today, on June 4 in 1923, a Unitarian minister named Norbert Capek created a flower communion with his church in Prague, in what was then Czechoslovakia. He wanted to help his congregation understand two things: that each person came freely to join the church, bringing their own gifts and beauty, symbolized by the individual flowers. And that together all the different flowers – each one at least a little different from all the rest – make a gorgeous bouquet that is better BECAUSE of the differences within it.

Norbert Capek was crocus-minded, and crocus-hearted, and when the Nazis came to Czechoslovakia they thought his teachings about the inherent worth and dignity of every person were too threatening to their control. He died in a prison camp. I feel very sad and a little scared, when I think about that; maybe you do too.

And yet, the only way the world changes, the only way the world gets a little less scary, is for people to be brave and crocus-hearted. We are being crocus-hearted together, in our new commitment to be a sanctuary congregation: to take a stand for justice in the immigration laws of this country, to say that we believe that the system now is not working and is not fair, and we want it to be better.

There are lots of ways to be crocus-hearted. And just as there are many, MANY other flowers, there are many other ways for our hearts to be that build our bouquet of justice and love. We need all of us, being ourselves, coming together to share in order to make this congregation. Many kinds of flowers, many ways of being, many kinds of work for justice and many ways to love.