Home » Services » Islam & the Western World: Can Our Ancient Wounds Be Healed? 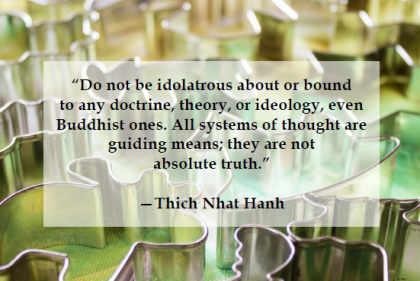 Perhaps no conflict in the world poses a greater threat to humankind than the persistent misunderstanding between Islamic and Western societies. Is there a way toward greater understanding?

Centering Thought: Do not be idolatrous about or bound to any doctrine, theory, or ideology, even Buddhist ones. All systems of thought are guiding means; they are not absolute truth. – Thich Nhat Hanh

In the course of history spiritual crises have arisen in various cultures when, seemingly out of nowhere a rare spiritual genius appears on the scene to provide a profound new vision that brings all of life into clearer focus.   This new vision empowers people and enables them to discover nobler purposes and higher quality of life.

Thus the time was ripe for something better.   A boy was born into this world with a tragic beginning – both of his parents died and he became a poor orphan, who experienced poverty and neglect first hand.  Overcoming this hardship, he grew up to become a sensitive and compassionate young man, who yearned for more spiritual depth than he found in his society.    Seeking spiritual solitude he regularly went to a cave outside the city.   There he was overcome by the sense that there is one sacred power lies at the heart of all reality.  He felt the overwhelming presence of this sacred power, and its compelling voice began to speak through him.  It was a profoundly unsettling experience.   He questioned his sanity, yet his wife offered encouragement and support and told him to trust this experience and to share this message.   He spoke those words he was compelled to speak to those who remembered and recorded them.

Those of us who don’t know Arabic will never experience the power and the beauty of his language, but those who heard him were awestruck and deeply moved.   They had never heard such a voice nor such a message.   Over time – one person at a time – the import of his words came to have a spiritually uplifting, socially unifying impact.  People felt that the message of these words came from a sacred source calling for them to bring forth their best selves in service to the highest and holiest.   The message this man delivered called for the worship of one God (Allah – “the” God), the ending of destructive behaviors and unjust social conditions, and it affirmed the spiritual equality of all humankind.

This man was finally recognized as a messenger, a prophet of God (Allah).  He had, as one biographer noted, “the gift of influencing people, and he had to nobility only to influence them for the good.”  (Syed Ameer Ali: “Spirit of Islam”)  Henceforth, he would be known as Mohammad (“highly praised one.”)  He also proved to be an able ruler and administrator, yet he maintained a very humble life style and made himself available to one and all.

During his lifetime virtually all of Arabia came under his control, and yet he did not exercise such control dictatorially – in fact, he broke new ground in human history by instituting religious toleration.  In time he died, yet a major new faith tradition was born – Islam – which translates as “the peace that comes when one’s life is surrendered to God.”

After his death the flaws and frailties of human nature kicked in – some of his followers, as adherents of all religious traditions have done, fell into bitter, sectarian disputes – disputes which future generations of Muslims would perpetrate with increasing ferocity, even unto this day.    Yet other followers found that this messenger revealed to them the path to a spiritually fulfilling, meaningful life, characterized by true humility, generosity, compassion and hope.

Which is to say that rigid religious ideology and intolerance has too often brought out the worst in humankind, yet critics of religion often forget that lofty religious ideals and inspiration have brought out the very best.  So it is with Islam, Christianity, Judaism, Hinduism and Buddhism (the major world religious traditions).

Even more tragic and destructive than the intra-faith religious strife that has afflicted humankind has been interreligious strife – and none has been more tragic and which bodes more ill for all of us than the ancient and ongoing rift between Islam and Christianity  (and by extension, Western culture in general).  It’s a festering wound that does not heal.  Indeed, the spiritual infections of fear, hatred and misunderstanding have flared up again and if not treated wisely could result in dreadful consequences for all humankind.

An underlying cause of this strife derives from the basic premises of Islam and Christianity.  Both claim to be “revealed” religions – that is, they hold that their teachings came directly from God and thus can brook no dissent.   When two such revealed religious traditions with dedicated adherents who believe that ONLY their revealed religion is true live in close geographical proximity it was inevitable that they would clash like two immovable objects, and of course they did, most notably in the so called “Crusades” launched by Catholic popes a thousand years ago.   It’s a conflict that has yet to end.

Even the most deeply spiritual of Christians were swept up in the Crusades.  Thus it was that none other than St. Francis of Assisi joined in the gruesome, blood drenched fifth Crusade in Egypt 1213.   To be sure, Frances’ involvement was a bit different than the typical Christian Crusader – he joined this crusade not in order to kill but to convert Moslems.    There’s more to tell of this intriguing adventure than time allows – suffice it to note here that one day Frances and Illuminatus, a companion who knew a smattering of Arabic, entered the camp of the Muslim military commander, the sultan al-Malik al-Kamil.

In those days, Muslims allowed Christians and Jews to practice their faith in the lands under their rule, but if Christians or Jews attempted to convert Moslems it was a capital offense punishable by execution.   When it became apparent to al Malik al-Kamil’s attendants that Frances was trying to convert them they prepared to execute him – a fate Frances fully expected – he was prepared to become a martyr for the Christian faith.   This Sultan  (Saladin’s nephew), however, was a deeply spiritual man himself and only fought the Christians as a last resort – he was always trying to make peace with them.  He was deeply touched by Frances’ example of being willing to sacrifice his life for what he believed to be true, even if he remained a devout Muslim.  Instead of killing Frances, al Malik al-Kamil invited him and his companion to his guest for several days.  During this time Frances came to realize that Muslims were not the monsters they were characterized as being by the Christian world – they were fellow human beings who happened to follow a different faith.

After Frances left the Sultan’s camp he could not leave behind the memory of this encounter.  He realized that forced or coerced conversion of Muslims could never work.  Indeed, he wondered if there might be more than one path to God.   While he considered his Crusade adventure to be a total failure it strikes me that it pointed the way toward the success we need to discover – how to recognize our common humanity and accept one another.

The ancient interfaith, intercultural tensions that led to the Crusades have not gone away – they have festered for millennia and now the threat of even more devastating violence hangs over our collective heads.  We may be only one devastating terrorist attack away from going over a precipice into the madness unspeakable cruelty and mutual destruction.

This interfaith, intercultural tension does not bring out the best in many.  Imagine – if you are not Muslim – how it feels to be a Muslim in America today knowing that most (around 55%) of your fellow citizens harbor an unfavorable view of your religion, wondering if your Mosque will be tagged with obscene graffiti or burned to the ground and fearing that you will be taunted and attacked simply for being who you are.

Anti-Muslim bigotry has become such a human rights concern in our country that at the last meeting of the General Assembly of Unitarian Universalists in June, delegate members of this free faith who have often supported the oppressed, the maligned and the marginalized, have a special call to support our Moslem sisters and brothers in this country we all call home, and to counteract the considerable forces of ignorance and bigotry.  Whenever the surrounding society loses itself in fear, hatred and bigotry our spiritual home here and other Unitarian Universalist congregations will be a light and a refuge in the darkness.  That is our heritage.  Dark times may come, so let us resolve to be a light in that darkness.

Yet even as we decry religious bigotry it cannot be denied that the source of much ignorance and bigotry in our world arises from the idol of religious ideology.   As “revealed” religions claiming exclusive pipelines to the divine both the Christianity and Islam tend toward intolerance.   Practitioners of both faith traditions have often claimed a monopoly on spiritual truth and coaxed, coerced and condemned and violated the freedom of conscience of those who did not succumb to them.

By virtue of existing in the Western world where it has had some of its roughest intolerant edges sanded down by the forces of secularism and modernity, Christianity has had to learn how to accommodate itself to pluralism and tolerance.   There are still those who go around proclaiming the “America is a Christian Nation” and seek to impose a narrow minded, irrational, compassionless morality upon society yet there are no Christian dominated countries where “apostasy” or converting to another religion is punishable by death as is true in some Islamic countries.   As president Obama diplomatically noted:  “some currents of Islam have not gone through a reformation that would help people adapt their religious doctrines to modernity.”

Especially noteworthy in regards to its virulent nature is the fundamentalist Wahhabbi sect which has been funded by the Saudi regime in exchange for not calling for the overthrow of their plutocratic monarchy – thus the Saudis have generously funded extremist Wahhabbi teachings across the world which has twisted too many minds to commit acts of terror.   Ironically, it has been western greed for Saudi Arabian oil that enabled this to happen.

Yet Wahhabism is an oppressive, fundamentalist distortion of a great faith tradition. Many Muslims have long practiced a faith that leads its practitioners to be spiritually grounded people who want to live harmoniously alongside others.  Too often overlooked is the vast segment of Muslims across the Islamic world who find inspiration in a more inclusive Sufi perspective, which permeates much more of the Islamic world than is often recognized. As one Muslim scholar notes:  essential principles shared by most Muslim Sufis include emphasis on commonalities with other faiths and traditions, which has contributed to improved relations between Muslims and Jews, Christians, Buddhists and other non-Islamic believers.

Were Mohammad alive today, I daresay he would embrace such a vision.  So do I.