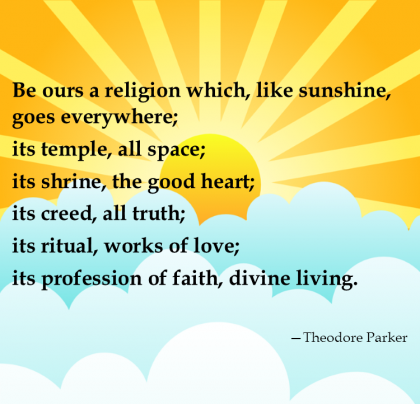 Centering Thought: As Unitarian Universalists we typically shun various types of religious and political fundamentalism, because, as one wit recently noted: “fundamentalists take all the fun out of life” (by their various prohibitions). So prohibitions are bad – right? Well, let’s explore this some more.

The words just came out of my mouth.  Although even I was a bit alarmed to hear myself say them, I could see that they had the desired effect and this was quite gratifying.  These words were spoken in response to being pestered, yet again, by an employee at a certain grocery store to use the self service line:  “Come over here and let me show you how to do this.  It’ll be much faster.”  Obviously these employees have been carefully trained on how to do this in a friendly yet commanding way so that many customers will fall into line and do as they are told.

Sure, I know that automation is the wave of the future, but I prefer to interact with real human cashiers and don’t want to see them put out of work by machines.  Alas, they predict that 50% of workers in the U.S. will be replaced by robots in the next few decades.  Be forewarned:  I won’t go without a fight.  I know that new robo-rev coming on the market has some flashy features but it’s still got some bugs to work out.  Instead of twenty minute sermons early prototypes have delivered twenty hour sermons.  How would you like that?   Sure, maybe I’m a bit longwinded sometimes, but with robo-rev it could be much worse.

But I digress – back to the grocery store.  When this one particularly assertive employee tried to shepherd me over to the self service line I blurted out:  “No.  I’m not going.  It’s against my religion.”  A look of alarm and confusion spread over the young man’s face –  he hadn’t heard this line before, so he quickly backed off, recognizing that I was not a docile sheep like customer he could herd around but possibly some religious nut who might do…. who knows what?

Some of you may not have realized that Unitarian Universalist teaching forbids the use automated self service lines:   As our 8th principle clearly states – OK, there is no 8th principle, there are just 7.  So you can, if you so choose, use the self service line and still call yourself a UU and I won’t judge you for doing this.   But doing this when there are other options is against my religion.  Why?  Because I think this automation takes away jobs and takes away part of our humanity.  Someday I’ll probably have no choice but face a robot cashier who will be programmed to greet me and seduce me into relating to it as though it were actually human, but until that time, not using the self service line is one of my small acts against the encroaching tech tyranny.  I say it’s against MY religion to go through the self service line.

So how is it that I get to create my own religion?  Well, in Unitarian Universalism we don’t have “a” religion for everyone to follow.  We do proclaim allegiance to the shared values embodied in our UU Principles and Purposes but we recognize that it’s unwise and impossible to dictate particular religious beliefs.  So each of us has to come up with our own religion – to be sure, we can embrace ancient and modern insights and teachings that come our way that strike us as true, and we don’t have to reinvent all the moral and ethical wheels that have served humankind well for ages.  Yet, in the final analysis, each of us does have our own religion.  I’m told that somewhere in Asia there is a Buddhist monastery and over the entrance it says “1,000 monks, 1,000 religions.”  True for us, too.

There are many who don’t think it’s true for them, that they don’t create their own religion, but they do.  People may claim to strictly adhere to the teachings of a particular faith tradition.  Yet their religion is not actually that objective religion but their particular subjective interpretation of that religion.  They just use the raw material to create their own religion.  Some folks use this raw material in beautifully creative, life affirming ways, while others, alas, twist and distort this in destructive and narrow minded ways, as you well know.

Since we do create our own religions and theoretically can claim that certain things “are against our religion” this holds great promise.  Just think – anytime you don’t want to do something you, especially as a Unitarian Universalist, have the freedom to say “that’s against my religion.”  Think of the possibilities:  “sorry, but it’s against my religion to take out the garbage/ mow the lawn/ clean the gutters/ do the taxes.”  After all, religion is renown for its killjoy prohibitions against having fun and following the dictates of reason and compassion, so why not turn this on its head?

When I think of killjoys, an especially noxious example stirs in my memory.  Many years ago, during my teen years – that time in life when one’s hypocrisy detectors are most finely tuned – a religiously conservative couple from Atlanta – old friends of my mother – visited us in Columbus, Ga. on their way through town to visit relatives in Alabama.   During dinner and afterwards they were complaining about how Atlanta had turned into a den of iniquity – all manner of people were drinking and dancing and not attending church like they should.  They gave my mother updates of the moral failings of certain people they knew.   On and on it went.  They were among the most morally smug, spiritually clueless people I’ve ever met.   For them, true religion was all about not doing anything remotely pleasurable, except maybe eating Southern cooking.   Right after we said goodbye to these killjoys I remember my mother sadly shaking her head saying “I just don’t know what happened to them.”  She was rightfully lamenting:  they had taken the rich raw material provided by the Christian tradition and turned it into something so utterly joyless and judgmental that it would have made Jesus weep.

This couple seemed so certain of their own salvation and the damnation of most other folks on planet earth who weren’t like them – such moral prigs spreading their gospel of gloom.  There is no lack of people transmitting their pain and unhappiness and ignorance out into the world – zealots, uncompromising radicals, fundamentalists (who take all the fun out of religion);  some are motivated by fear, hate, ignorance, intolerance, self righteousness and bigotry  and for others its just pure greed.  And when I think of such people I feel anger at the harm they do.

And then I catch myself – what am I doing here?  What higher purpose does it do to play the same game and morph into a killjoy myself – condemning those who condemn and harboring ill will towards them?  Why not look deeper?   Why not seek to understand the underlying conditions that lead folks into their joyless, loveless cul de sacs?   After all – don’t I call myself a Unitarian Universalist?   The Universalist half of our tradition was founded on the heretical notion that God condemns no one to eternal damnation.  There was considerable dissent among the Universalists  (the ultra and Restorationist Universalists) as to whether there is any punishment at all after death, but they all agreed that no one is eternally condemned.  I love that theology in the abstract.  It’s my theology.

But then the rubber hits the road:  Simply put, Universalist theology means that you can’t say “to hell with you.”  Or at least “not to eternal hell with you” and sometimes I have wanted to say that to some who do cruel, mean spirited, greedy, despicable things in the world.     This isn’t to say that you can’t seek justice and accountability and confront wrongdoing   – but Universalist theology doesn’t allow you to condemn someone forever and ever.  To be sure, you may need to break off relations with hurtful people, we may need to incarcerate dangerous people, but Universalist theology doesn’t allow us to utterly condemn any soul as beyond all redemption.   (Neither, by the way, does Buddhist or Hindu philosophy).   Simply put, this Universalsit religion – my religion – doesn’t allow me to make a permanent home for hate in my heart.  It doesn’t serve the greater good and not spiritually healthy.  I know that.

Along the path of life, if you pay some attention to the way things play out – especially causes and effects –  you just might get a bit of wisdom and realize that certain things never, ever have good outcomes, so why go there yet again?  (I’m thinking of things like holding grudges, saying spiteful things, envying others, avoiding legitimate responsibilities and challenges – and above all, harboring hate in one’s heart).  It’s good when you can clearly recognize when circumstances arise that might lead you to make some poor decisions and you simply note to yourself “that’s against MY religion.”   You don’t have to blurt this out in a grocery store – just a quiet inward acknowledgement that some choices you have before you do have spiritual implications for good or ill.  I call this the path of personal prohibition – it comes from within.  Externally imposed prohibitions enforced by others (Consider the disastrous consequences of the prohibitions against alcohol and drugs in our society) don’t work so well.  But personal prohibitions that arise from clear awareness that the choices we make on the path of life do matter.

I actually have lots more to say on this topic would like continue on, but it’s against my religion to bore people with interminable sermons.  Good enough for now I hope.